I would not be here in Astoria today if it were not for one Ms. Jennifer Chase. Who I owe a long overdue phone call, btw, even though we only live a few blocks from each other. Jen has been a long friend of mine from home where our mothers used to teach together at good ol’ PYE and our families would get together for occasional pizza nights at the local Pizza Hut, or order in and spend the evening around the kitchen table over dinner and cookies, discussing the latest events and happenings in our respective lives. It was fate that brought she and her mom to our house one day when she was home (Jen had already been living down in the area for quite some time now) to drop in and say hello. We got to talking and I said I was looking to make the big move to NYC to pursue my dream of singing professionally, and that I was just going to find an apartment and then find a job and it would all magically work somehow. I remember those days of looking on craigslist at apartments and seeing things in the UWS, $1600 for a 1 bdrm, and thought, sure, no problem. My rent is far less than that currently and I still have to meticulously plan each month to make sure I’m squared away. All that is to illustrate just how naive I was and how little I understood about how NYC works. Jen, being the kindhearted and generous person she is, said, “First get the job, then the apartment. I live just outside the city and have a futon that you can stay on until you figure things out. I’ve had friends stay there off and on, come on down” I, having a few suitcases and bags of clothing, shoes, sheets, etc and $75 dollars in my bank account, took her up on her generosity and set up camp on her futon on Audrey Ave. in Elmont, Long Island, with the intention of staying for a month or so until things fell in line. I stayed for a year. Rent free. Go ahead, take a minute and let that sink in. Ok.

Things did go well and fall in line, but in the form of tours and possibilities of tours that kept pushing back the thought of getting an apartment together. When we talked about it, Jen kept saying, “Oh my God, I LOVE Astoria. It’s just the best. I want to get back there. That’s where we need to look for apartments.” She had lived here for years before and I had even stayed a night with her before years before our NYC journey together even began. A roommate’s unfortunate boyfriend situation led to the need for an immediate place which brought her to Long Island, but she never stopped wanting to get back. If her generosity of letting me crash for an entire year wasn’t enough, when she found a place, I wasn’t prepared for all that a NYC move entails – first/last/security, etc, and she fronted the security deposit for me. This woman deserves a friendship medal. We spent the next year in quasi-harmony 🙂 but never ceased to be close friends and remain that way today.

Great story right? I bet you’re curious what the point of all that was. Well, we’ll get to that later. For now, let me tell you about my week.

I made a stop at Parisi Bakery as suggested by Engine 262.  I dropped them by with Frank on Thursday and got to meet Joe this morning when I went to pick up my plate.  As a side note, I also picked up a slice of lemon coconut roll cake on Thursday that was definitely not made for just one person but I managed to decimate the whole thing.  I’m pretty sure anything you get from there will be just as yummy. 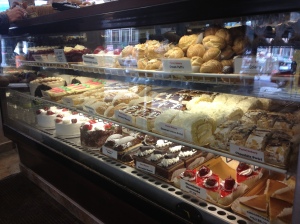 I grabbed a cup of coffee (also very good, btw) and said i just needed a minute of their time and would wait and let them help the actual customers.  I didn’t have to wait very long due to the quickness of service, not the amount of people that kept coming.  Every time I thought things had died down and I could talk with Joe for a few minutes, someone else would walk in!  And literally every person that came in was either addressed by name or treated like an old friend.  That’s just the way they do things at Parisi.  So when it finally was my turn, I introduced myself to Joe and vice versa and told him who I was.  He responded with, “Oh, you’re the one!  That’s a great thing you’re doing, my brother told me all about it!  And the cookies were good, actually!”  Ha, the cookies were good, actually.  Coming from a baker, I will take that as high praise.

We chatted for a few minutes and he was genuinely interested in the project and wanting to know more about it.  Although, from my short interaction, I’d be surprised if there is anything Joe or anyone else does there that is not genuine.  I walked away with such a good vibe, feeling like I just made a new friend.  One that just happens to make excellent baked goods.  Joe did also sincerely offer the use of their kitchen and generally “them” if there was something big I was working on or needed, or really just for anything.  It’s an offer that is very generous; people better watch out what they offer, I will take them up on it one day.

When I asked Joe where he thought I should go next week, he said without hesitation, “Sorriso’s.  It’s an Italian pork store over on..” and I interrupted him before he could go any further.  Oh, boy, do I ever know Sorriso’s!  I explained to him how they were a part of the start of SGC but that I had never been there as part of the official weekly drop.  I know the chocolate chip cookies are the Single Girl Signature, but these guys and gals deserve something different, something special.  Stay tuned, as I’ve got just the thing…

I also had what I’m calling an extra curricular drop this week.  I saw the show Blood Brothers last weekend at the Astoria Performing Arts Center and wanted to say “congratulations” with something sweet.  I wanted to do something different than cookies (in addition to cookies, I should say) and the organic store down the street had a great sale on strawberries, so I thought strawberry cupcakes would be nice.  The cake part turned out delicious as always but I couldn’t quite get a strawberry frosting that I was happy with, both in taste and in look.  I thought, what would look cool and also taste good?  I thought maybe a vanilla frosting with a dollop of strawberry preserve in the middle almost like a buck eye cookie would be good.  Luckily, I had some friends staying with me (built in taste testers) and we were able to come up with the perfect balance.  What resulted are some of the best things I’ve done yet! 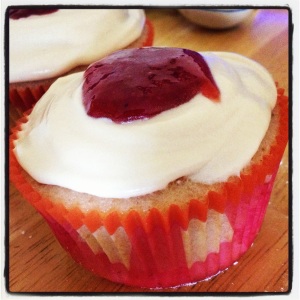 I swung by the APAC on Saturday to drop off the cookies and cupcakes before I had to jet into the city to teach lessons and didn’t want to stick around and bother the actors before the show.  I completely forgot to take pictures, but luckily, my friend Jenny, wardrobe supervisor for the show, had the forethought to do it for me. 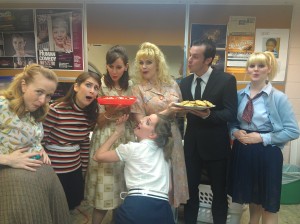 The cast ogling the goods. 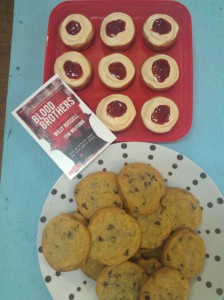 What would any of us do without our friends and those who offer their services, kitchens, forms of help and selves?

In regards to the story I told you about my Astoria origins, I have what I call a lot of “couch karma” to pay back and frequently offer my aerobed or couch to anyone that needs a place to crash. For the last two weeks I’ve had a pair of brothers, good friends of mine from home, staying with me while they work here in the city for a bit. They’ve been immensely fun to have, helpful with dishes, tasting of new recipes (I need that more than you’d think, and would love any volunteers!) and for a pair of men, are fairly tidy too 🙂 They did bring me many ‘thank you’ goodies for the couch stay and contributed to the Single Girl cause. I also had a friend from college reach out to me after reading my post to offer her business knowledge and more to help me sort things out. I got to spend another whole day with a new friend just talking things out and taking in art. And I know you all saw that ridiculous display of awesome that my mother sent me in an unexpected package.

The point is, nobody goes this life alone. We might think ourselves the most independent, stalwart islands of a person, but we all need a little help from time to time. There’s no shame is asking for it and there’s certainly no shame in taking it. Just be sure you’re giving it every once and a while too.