July 4th weekend!  There’s nothing like it, no matter where you are.  Lucky for a lot of you reading this, you happen to live in the greatest city in the world (some in the best neighborhood ;)).  I hear there are fireworks at Citifield after the game on Wednesday night, I’m sure we’ll have the usual street fairs on Thursday, and I know my friends at Singlecut are having a special July 4th Edition of Trivia Night.  All this to celebrate our country’s independence.  I find that especially moving living in Astoria where it is such a melting pot of cultures, races and generations.  That’s what makes this place so great!

And speaking of cross culture, this week my drop was at Max Bratwurst and Bier on the corner of 30th Ave and 47th Street.  I actually used to live over in that part of the ‘hood on 48th and 30th (I’ve had 3 apartments in my 4 years here.  Moving and I are bffs) and watched it go in.  Embarrassingly enough, I had not been there to eat until now. And for anyone else that is saying the same thing, GO.  You will not regret it.

I did my typical drop on Thursday, just the usual “Here are some cookies, yada yada, I’ll be back for the plate, see you then!”  And then all weekend I looked forward to picking up my plate so I could have dinner there 🙂

I came back to Max’s on Sunday, hungry and excited.  I had biked to the LIC Flea earlier that day and all that biking had worked up a appetite.  That’s another place you have to check out, http://www.licflea.com.  Open on Saturday and Sunday from 10-6, it’s exactly what you’d think a flea market in LIC would be; a perfect blend of artisan booths, great food, and antique pop up shops on the water in LIC.

The view from LIC Flea

I had a delicious donut (for $1!) from Old Fashioned Doughnuts, bought a vintage Paloma Picasso scarf from Harold and Maude Vintage and spent the rest of my time avoiding food stalls, trying not to ruin my appetite for later that night.

When I got to Max Bratwurst and Bier, I was ready for some good food.  I sat outside in the back of Max’s seating area so I could be close to my bike because my lock broke and I didn’t want to take any chances.  When Daisy, a server there, returned my plate to me, she gave me two cards, each good for one free bier.  I decided it would be very un-German of me to have a brat without a bier, so I cashed in one of my cards, ordered a Farmer hot brat and a side of fries and kicked back with my Hofbräu.

Fun fact, did you know HB was gluten free?  I was informed by the friendly waitstaff that most of the biers they serve at Max’s are gluten free.

When the food came out, it was more than I expected.  You definitely get a bargain for what you pay.

The brat was so good, nice and spicy without being overwhelming, topped with sweet peppers and caramelized onions, and the fries were nice and crispy on the outside with an almost melty hot inside.  Two foods I will never get tired of eating are french fries and cake.

I told Daisy a little bit about Single Girl Cookies and told her I needed a recommendation for next week.  She called up the owner and came back with Ponticello Ristorante.  Now, after being all around the neighborhood, I rarely am close to where I live, but this is three blocks away!  It’s also another place I’ve walked past for years and haven’t been.  And, if I’m being truthful with you, I’ve been watching The Sopranos lately and have had such a craving for Italian food.  Same thing happens to me when  watch Mad Men, except with whiskey.

Now, this weekend I’m out of town again for my brother’s wedding and have to do my drop on Wednesday.  I called to check their hours to make sure they were open and find out that starting that night at 9, they close for three weeks for summer vacation.  Well, darn! 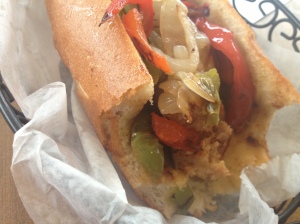 As I’m finishing my brat (I just can’t say enough good things about it, so good), the owner, Renis (pronounced Renny) and a group of his friends have a seat at the table next to mine.  There are many thanks passed around and I tell him about Ponticello’s and that I need another recommendation.  He tells me that his friend Alex owns The Chicken Shack on the corner of 35th and 30th and that’s where I should go.  Either way, I’m still going to be very well fed 🙂

I finish my brat and bier, and Renis sends another bier over from him as a thank you for the cookies.  That opened the lines of communication, as that kind of gesture tends to do.   I like to ask people, “What’s your story?”.   It is purposefully open ended so people can actually choose what they want to share, rather than answering a very pointed question like, “So, what do you do?”, and also, we are more than being defined by our job.  I asked Renis, and all of his friends that were hanging out, what his story was.  I found out he’s a young entrepreneur with a wife and child at home, who opened up this place because he saw a hole in the offering of food in Astoria, and that there wasn’t a German place besides the Bohemian Hall.  Originally from Albania, he moved here when he was 16 after his parents came for a better life and has worked his way up to business owner.

I asked his many other friends a little bit about their background and how they got to this place, NYC/Astoria/where they are in life.  One was from Croatia and had been here 18 years, another been here only a year from Italy, another a German born Italian with the craziest accent I’ve ever heard who identifies as “Italian with a German education”and is taking ESL classes geared at those going to college.  I was the only US born American at that table.

And isn’t that one of the greatest things about living in Astoria?  You can turn a corner and be surrounded by literally 10 different cultures, 4 different languages, 5 different cuisines, and you’ve just stepped out of your doorway.  As different as we all are, the thing that unites us and makes us all the same is that we are all working toward the same goal, a good life, good friends, and happiness.

This group asked me where I hang out.  I replied, “I don’t, really.” I explained that most of my friends are into their own thing, schedules are hard to get together and I don’t have many friends anyway.  Renis pulled back, slightly offended and said, “Hey, what are we now?  Are we not friends?”  Indeed, we are now.

So, enjoy this weekend!  Celebrate your independence safely, knowing you have the freedom to do things you love and live your dream.  Thanks, Astoria, for making that possible for this Single Girl 🙂