For those of you in the know, you’ll be happy to know that a check and informational package is on it’s way to the Red Cross as you read!  For those of you scratching your head and saying, “Whaa..?”, here’s the deal:  Single Girl Cookies put on a fundraiser last Saturday the 25th  to help the victims of the recent Oklahoma tornadoes.  I made about 100 cookies, was asking for a $5 donation per cookie, set up shop at Singlecut Beersmiths, and watched the donations pour in.  I still can’t thank you all enough for making it happen.  To Singlecut for donating their space and grain bag handbags, to everyone that gave money and enjoyed a cookie, and to my friend Corey, who is from that area and has helped me funnel the funds directly to Moore, OK.  Oh, and BoroMag and Zagat for doing those write ups too!  http://boromag.com/featured/eat-a-cookie-to-help-oklahoma/    http://blog.zagat.com/2013/05/restaurants-for-oklahoma-relief-where.html?utm_campaign=-&utm_medium=social&utm_source=twitter&utm_content=national&utm_term= 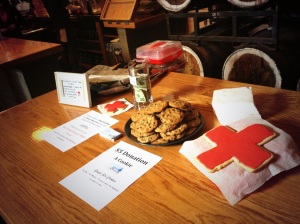 Singlecut even had milk on hand! 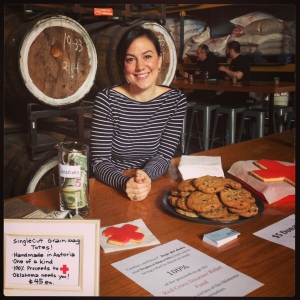 All and all, it was a great success.

I also did my usual Thursday drop this week, at Off the Vine, a wine shop on the northwest corner of 45th St and 30th Ave.  I used to go there a bunch when I lived on 44th Street and have always enjoyed their selection.  John Paul is always really knowledgeable and can steer you toward a good selection that is a little bit different from your usual go to wine.  I didn’t get around to picking up my plate until Tuesday after Memorial Day but when I did stop in, her referred me to go to Lost Sock Laundromat right across the street.  Being that I have approximately 4 loads of laundry to do, this feels little like kismet.  Or at least a reminder to do my laundry.

Speaking of Memorial Day, who was at Strand’s block party???  Was that not the best time ever?!?  $2 Narrangansett Beer, multiple bands, bbq – it doesn’t get better than that.  I came with a plate of cookies with the intention of meeting a follower and continuing my fundraising but while I was waiting in line, got recognized as Single Girl!  Although, before I get cocky about my reputation, who else would be waiting in line to get a beer with a plate of cookies?  I made some new friends, collected a few more donations, and before I knew it, the cookies were gone.

Keeping in the theme of party week, I attended Yelp’s Spring Spectacle at the Museum of the Moving Image.  For those of you who haven’t seen this exhibit yet, get over there.  Spectacle The Music Video explores the world of, well, music videos – fan made, cult favorites, sans music, interactive, etc. 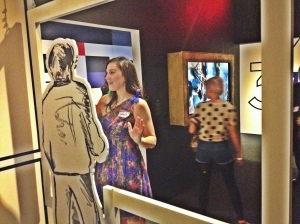 For this musician, it is by far one of the most fun exhibits I’ve been to, only second to the Jim Henson exhibit that was at MoMI last year.  A big shout out to Jando from Yelp for sneaking me onto the list last minute 🙂  There was food and drink, a really great dj, and a photo booth.

AND you got to explore around the museum.  Welcome to the World of Awesome.  My favorite snack came from the Alobar table, a place in LIC that I’d been meaning to get to for a while.  If anyone cares to join me, I’ll be there tonight, I an attempt to escape the heat and humidity as well as try some delicious food.

Some of you may have noticed this post is a little later in the week than others, which is just a reflection of how nutty the other half of life is becoming.  I’m taking a week off from the usual drop, although not from baking entirely; I made some strawberry cupcakes with strawberry icing this morning for a friend as well as some cookies for rehearsal today.  After this weekend’s success, I felt I needed the time to collect my thoughts, wind down the spring semester with my voice students, and come back next week refreshed and more ready than ever.  It’s going to be a Single Girl Summer to remember!

Error: Twitter did not respond. Please wait a few minutes and refresh this page.